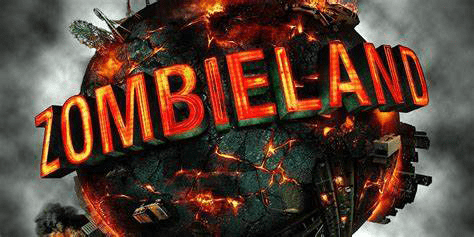 “Nut Up or Shut Up!” In this film Zombies have taken over America. A shy student Jesse Eisenberg known as “Columbus” is trying to reach his family in Ohio. Woody Harrelson played Tallahassee a gun-toting tough guy trying to find the last Twinkie, and a pair of sisters played by Emma Stone as Wichita and Abigail Breslin as Little Rock are trying to get to an amusement park. They join forces to travel across a zombie-filled America. 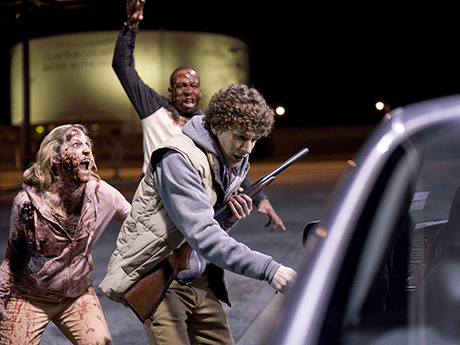 Columbus has survived by following his 30 rules: such as “look in the back seat,” “double-tap,” and “avoid public restrooms.” Columbus wants to get to Ohio to see if his parents are alive. He comes across Tallahassee who is a boisterous zombie-hating good-old boy headed for Florida, and wanting a Twinkie. They soon comes across a young woman whose sister has been bitten by a zombie and wants to be put out of her misery. The sisters were headed to an LA amusement park they’ve heard is zombie free. However, Columbus and Tallahassee were duped when the sisters take off with their truck and leave them stranded.

The two men find a yellow Hummer H2 loaded with weapons and go after the sisters. They catch up with the sisters and the men once again are outplayed. However, Tallahassee and Wichita have a stand-off off. The sisters reveal that they are going to the Pacific Playland amusement park in Los Angeles, an area supposedly free of zombies. Columbus learns his hometown has been destroyed, and so he decides to go to California with everyone. Along the trip, Columbus starts falling for Wichita.

When the group reaches Hollywood, Tallahassee takes them to the mansion of Bill Murray. Tallahassee and Wichita meet Murray himself, uninfected but disguised as a zombie so he can walk safely around town. Columbus kills Bill Murray during a practical joke when he is mistaken for a real zombie. Columbus realizes that Tallahassee has not been grieving for his young son and Wichita becomes increasingly attracted to Columbus while Tallahassee bonds with Little Rock. Due to Wichita’s fear of attachment the two men are duped once again by the sisters when they leave the next morning. Columbus decides to go after Wichita and convinces Tallahassee to join him.

The sisters arrive at Pacific Playland and activate all the rides and lights so they can enjoy the park. This only draws the attention of zombies. The sisters find themselves trapped on a drop tower ride, but then Tallahassee and Columbus come to the rescue. Tallahassee lures the zombies away, so Columbus can get to the tower ride and lower the sisters. Before Columbus can save the girls he has to conquer his fear of clowns. Tallahassee eventually locks himself in a game booth, shooting zombies as they arrive. When the girls are finally on level ground Wichita kisses Columbus and reveals that her real name is Krista. As the group leaves Pacific Playland, Columbus realizes that without having other people, you might as well be a zombie. He also realized that he now has a family.