It’s Halloween time so what better activity to do than visit the 109 year old prison? It was built between 1886 and 1910. It closed its doors in 1990. The architecture, in my opinion, is gorgeous! It definitely is a monstrosity. The original architect was Levi T. Scofield from Cleveland, who used three architectural styles; Victorian Gothic, Richardsonian Romanesque and Queen Anne.

The reformatory has had its shine in the spotlight a few times. In 1994 the movie Shawshank Redemption used the prison for most of the movie. Harry and Walter go to New York, Tango and Cash, and Air Force One to name a few. The prison has also been the spot of paranormal activity. Shows like Ghost Adventures Ghost Hunters have done investigations there. The inside is not so much. Of course it’s dilapidated by paint peeling from the walls, ceilings,cells, and the wooden floors are scuffed.

There are a couple different tours you are able to take, a self guided or guided. We chose the self guided. We like to go at our own pace. The reformatory is set up like a museum. Prior to entering the actual part that houses the cells there are several rooms that the tour takes you through. The rooms house memorabilia such as furniture, a straight jacket, “Sparky” the electric chair, meal trays, and shackles amongst other things. There are many things from the movie Shawshank Redemption that are placed throughout the rooms that were used in the movie along with life size cutouts. We were more interested to find cell 13. Why? Ghost adventures interviewed a former prisoner (who helps with tours and tells the stories) who told them of cell 13. The man who lived in cell 13 doused himself in paint thinner and lit himself on fire. The cell is known for activity. 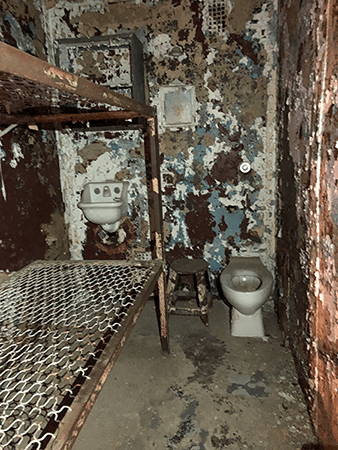 Since we went at Halloween time we were only allowed to tour one floor of the cells. The prison holds a haunted experience. As we entered through the door that leads to the cells it was immediately cold and minimal lighting. The cells were to our right and to our left were bars from floor to ceiling. The path to walk was only about 3 ft wide. The cells themselves were approximately 5×10 and housed a toilet, a sink, and a bunk bed. As we walked by each cell I thought to myself, how was here? What did they do? How long were they here?

The numbering of the cells was not making sense to me as I’m looking for 13. Kevin was in front and as we approach this one cell and Kevin went in for some reason (we did not go in all the cells). I was standing at the cells opening. There was a light headed feeling that came over both of us along with a dizzy confused feeling. I then turned my video on. As I look up I see it’s cell 13. WOW! I then walked in with my video on. We both experienced goosebumps and cold chills. It also got very very cold in the cell itself. We weren’t scared, but it was definitely something neither one of us will forget. As we left the feelings disappeared as quickly as the came.

We continued our tour and never had another experience. We both agree it’s a great place to get your heart pumping. So, if your in the area add it to your to do list. You won’t be disappointed and look for cell 13!