No One Can See To Many Castles! Join us on our adventure into Scotland. 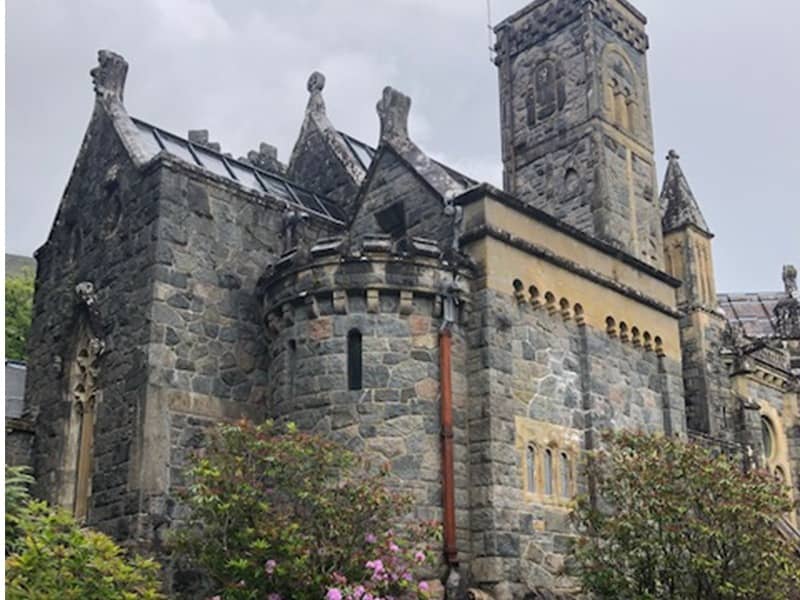 Guide Morin Earthscapers! Now, that needed to be in your best Scottish accent. We woke to about the same temperature, in the 40’s and high was 56 an overcast. There were some breaks of sun and not a lot of rain. Please note that I have done video on all the castles we saw today and you will be able to view them on our YouTube Channel, Earthscaperus.com. First stop was Stirling Castle. The castle dates from at least early 12th century. Built by James IV, James V, and James VI. Sieges and occupations during the Wars of Scottish Independence (1296–1357); sieges in 1651, 1746. Wikipedia.

We were not able to go visit the castle due to reconstruction. It is so covered by trees we were not even able to get pictures. Next on our stop was Doune Castle, built c. 1400 by Robert Stewart, Duke of Albany. Some evidence shows it was originally built in the thirteenth century, then probably damaged in the Scottish Wars of Independence, before being rebuilt in its present form in the late 14th century. The castle saw military action during the Wars of the Three Kingdoms and Glencairn’s rising in the mid-17th century, and during the Jacobite risings of the late 17th century and 18th century. By 1800 the castle was ruined, but restoration works were carried out in the 1880s, prior to its passing into state care in the 20th century. There were a few film productions done at Doune Castle. In 1952 the film Ivanhoe, Monty Python’s Holy Grail, and the Game of Thrones, Winterfell, and Outlaw King. It was also used as a stand-ins for the fictional “Castle Leoch” in the TV adaptation of the Outlander series of novels.The castle was also used as a location in Outlaw King. Wikipedia This place was very historical in nature. Not much of the grounds were done, but nonetheless it was awe inspiring. They were not allowing anyone in as it is under renovation. Next! 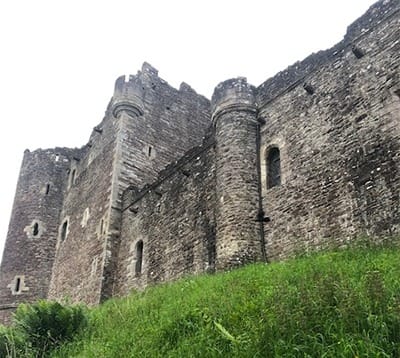 Kilchurn Castle was next. What a beautiful overwhelming site as you turn the bin. You walk along a small gravel path and under the tressel of a bridge then through a gate that houses behind it, one cow, 2 yaks, and one sheep (is it a sheep when there is only one…lol). As you round the bin, there is stands in all its glory!!! It’s breathtaking. There is a body of water to the left and behind the castle. We were able to go inside which was phenomenal! Some areas were off limits as it is dilapidated to where there is no roof, but still stunning. Located in the northeastern end of Loch Awe, in Argyll and Bute, Scotland. This castle holds it own. It was first constructed in the mid-15th century as the base of the Campbells of Glenorchy, who extended both the castle and their territory in the area over the next 150 years. After the Campbells became Earls of Breadalbane and moved to Taymouth Castle, Kilchurn fell out of use and was in ruins by 1770. Wikipedia.

Kilchurn Castle was next. What a beautiful overwhelming site as you turn the bin. You walk along a small gravel path and under the tressel of a bridge then through a gate that houses behind it, one cow, 2 yaks, and one sheep (is it a sheep when there is only one…lol). As you round the bin, there is stands in all its glory!!! It’s breathtaking. There is a body of water to the left and behind the castle. We were able to go inside which was phenomenal! Some areas were off limits as it is dilapidated to where there is no roof, but still stunning. Located in the northeastern end of Loch Awe, in Argyll and Bute, Scotland. This castle holds it own. It was first constructed in the mid-15th century as the base of the Campbells of Glenorchy, who extended both the castle and their territory in the area over the next 150 years. After the Campbells became Earls of Breadalbane and moved to Taymouth Castle, Kilchurn fell out of use and was in ruins by 1770. Wikipedia.

We just happened along this little place that turned out to be a diamond in the rough, St Conan’s Kirk. It is located in the village of LochAwe in the parish of Glenorchy and Innishael in Argyll and Bute, Scotland. It was established as a chapel of ease by the Campbells of Innis Chonan. This place reeked of due respect and an honorable presence. The pews were made of solid wood and well worn. Who sat in these pews? Kings, Queens, Knights, Jesteurs? Who knows? It’s fun to think of the people that walked on the same floor. It is renowned for the fragment of bone that is rumoured to have come from Robert the Bruce, King of Scotland. Wikipedia. We spent quite a bit of time at St. Conan’s Kirk and we were thirsty and hungry. We stopped off got some espresso and then a small market to purchase some snacks before, heading on to Castle Stalker.

This castle boasts a four-storey tower set on a tidal islet on Loch Laich, an inlet off Loch Linnhe. It is about 1.5 miles (2.4 km) north-east of Port Appin, Argyll, Scotland. The name “Stalker” comes from the Gaelic Stalcaire, meaning “hunter” or “falconer”. The island castle is one of the best-preserved medieval tower-houses in Scotland.

The original castle was a small fort, built around 1320 by Clan MacDougall who were the Lords of Lorn. Around 1388 the Stewarts took over the Lordship of Lorn, and it is believed that they built the castle in its present form around the 1440s. The Stewart’s relative King James IV of Scotland visited the castle, and a drunken bet around 1620 resulted in the castle passing to Clan Campbell. After changing hands between these clans a couple of times, the Campbells finally abandoned the castle in about 1840, when it lost its roof. In 1908 the castle was bought by Charles Stewart of Achara, who carried out basic conservation work. In 1965 Lt. Col. D. R. Stewart Allward acquired the castle and over about ten years fully restored it. The castle was brought to fame by Monty Python appearing in the film Monty Python and the Holy Grail. For today our site seeing of castles ended as we made our way through the Highlands (outdoor capital of the UK). We were directed by the GPS to take A84. We were told by a local that the A84 would be the most beautiful drive we have ever taken. That local was right! It was the most spectacular ride either one of us has been. We passed by the most lush green, overwhelming mountains, blue green water, and one portion filled with the most beautiful purple flowers. You can’t even dream this kind of stuff up.

Upon our travels we saw Ben Nevis. Ben Nevis is the highest mountain in the British Isles. Standing at 4,411 ft above sea level, it is at the western end of the Grampian Mountains in the Lochaber area of the Scottish Highlands, close to the town of Fort William. The Aenglysh translation is, Venomous mountain” or “mountain with its head in the clouds” The summit, which is the collapsed dome of an ancient volcano, features the ruins of an observatory which was continuously staffed between 1883 and 1904. The meteorological data collected during this period are still important for understanding Scottish mountain weather. Wikipedia

After this breathtaking view we decided we better find a place to camp and get some much needed rest from the events of the day. We decide to go ahead and head to the Isle of Skye. We called many sites, but not many had availability. However, one did, Ashaig Campsite Skye. This place was someone’s personal land that they have turned into a very old type campground. There is no rhythm or reason to set up. There are showers that are clean and hot water. They use an RV for people to use for cleaning up dishes. We decide to pick a spot and as we are looking we get attacked by what are called midges. Midges are a species of small flying insect, found across the British Isles, Scandinavia, other regions of Europe, Russia and Northern China in upland and lowland areas (fens, bogs and marshes). In the north west of Scotland and northern Wales the highland midge is usually very prevalent from late spring to late summer. NFemale highland midges are well known for gathering in clouds and biting humans, though the majority of the blood they obtain comes from cattle, sheep and deer. The bite of Culicoides is felt as a sharp prick. It is often followed by irritating lumps that may disappear in a few hours or last for days, depending on the individual. We continued to be consumed by these things. We were covered yet there were people camping here. We were told any slight breeze will take them away. Well, there was no breeze. We ended up getting our money back and leaving. We head further North and stopped at 2 other campgrounds and both told us the midges are really bad and if they bothered us then we wouldn’t like staying there. We continued our journey to The Old Man of Storr (see next days blog for details). Our thoughts we could see The Storr before it got too dark. We did start the journey, but realized we had taken the long route and that it would be too late since it was 49 minutes each of up and back. We turned around to head back to the car. There were 4 other cars/caravans parked in the parking area looking like they were camping for the night, so we decided to copy them. We slept in the car. God help us…lol