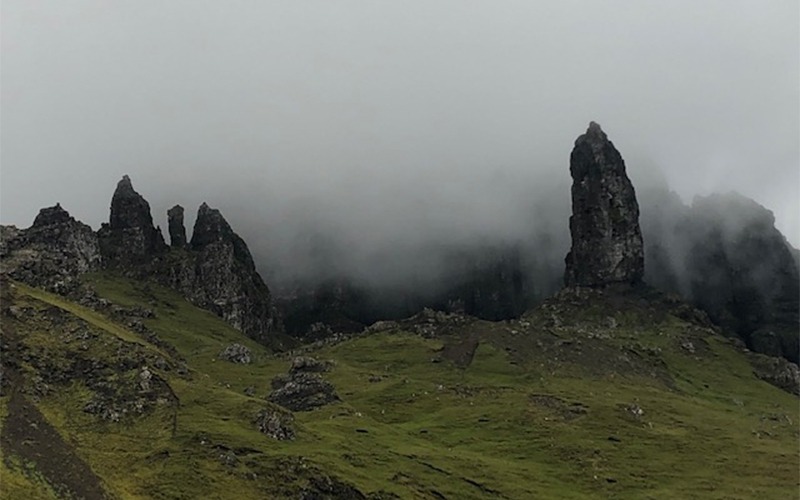 Guid Morin travel enthusiasts! Woke to clouds and rain!!! About 50 degrees. It was a very grayday, but no worries…WE ARE IN SCOTLAND, THE ISLE OF SKYE. We slept in the car as the midges were too bad to deal with. Old Man Storr was waiting for us to climb his massive entry way. It was raining for the entire time, but we were climbing his mountain regardless. We donned our Frogg Toggs, gloves, and hats. We also used our trekking poles which worked out great for the steep climb and descent.

What exactly is Old Man Storr! It is a rocky hill on the Trotternish peninsula of the Isle of Skye in Scotland. The remnants of ancient landslides. This was the location for the film Prometheus featured in 2012. The longest such feature in Great Britain. The hill presents a steep rocky eastern face overlooking the Sound of Raasay, contrasting with gentler grassy slopes to the west. The area in front of the cliffs of the Storr is known as the Sanctuary. This has a number of weirdly shaped rock pinnacles. In January 2012, production of the science-fiction film Prometheus moved to the Isle of Skye, with filming taking place at the Old Man of Storr.

We were in need of hot coffee and a warm meal. At this time it’s about 8:30am and nothing is open yet. We did manage to find a cute cafe called Cafe Arriba. We ordered a breakfast roll which is bread with your choice of 1 item. You can add other items at an additional cost. We both ordered an egg and beans. It was way larger than I had anticipated. It was very good. I ordered a Mocha and Kevin an Americano. Neither were that great, but we were thankfully for something warm. Next adventure, Fairy Pools.

The Fairy Pools. The name Fairy Pools probably derived from old Norse Bred Dal (“broad valley”) with the Gaelic glean (“valley”) being prefixed later. What can I say? This place is magical. We did not have good weather at all, but we aren’t going to let it ruin our day. I will say this. If you bring equipment or items to make it easier or to keep you warmer, drier then by God use it!!!!! It was pouring cats and dogs on our way there. When we arrived at the parking area the lady taking our 5pounds for parking said they just had a downpour. I said, “I know, we drive through it.” She stated it was very muddy and slippery. We had our hiking boots on already, but we should have put our rain boots on, that’s why we brought them, for the rain and mud. Next, we should have taken our trekking poles. Did we? No. Why? I have no idea. 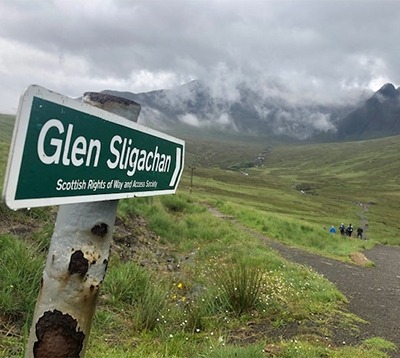 It’s a pretty steep slope walking down (it’s down then up). It was so muddy that your foot sunk about 3-5 inches down. It was very very slippery as there was hardly any grass. What rock was there was wet and it was raining, so they were no help with traction. There was still one more place on our list for the day, Eilean Donan Castle. Eilean Donan Castle, which simply means “island of Donnán.” Donnán is said to have established a church on the island, though no trace of this remains. The castle was founded in the thirteenth century, and became a stronghold of the Clan Mackenzie and their allies the Clan MacRae. In the early eighteenth century, the Mackenzies’ involvement in the Jacobite rebellions led in 1719 to the castle’s destruction by government ships. Lieutenant-Colonel John Macrae-Gilstrap’s twentieth-century reconstruction of the ruins produced the present buildings.

During our visit it was still raining, but what an elegant castle. It’s backdropped is nothing short of jaw dropping. Surrounded by lush greenery, water (which I’m sure is sparkling when it’s sunny out…lol), and mountainous terrain. There is a long stone bridge that leads from the parking area to the castle. The bridge is made of ancient stone and has several archways within it. The water level in our visit was very very low and nowhere near where it should have been, but it’s way to picture. There is a Scottish flag that flies at high mast to the front right of the castle. We did not pay the 10pounds per person to go in, maybe next time. You could spend a million dollars doing and seeing everything they charge for here. That was then end of our day.. So, I thought… 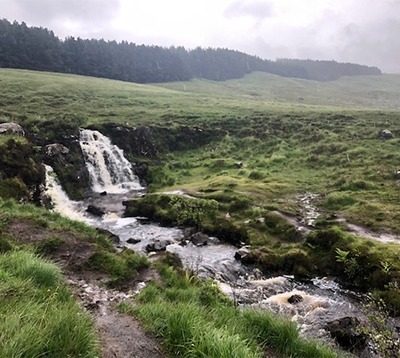 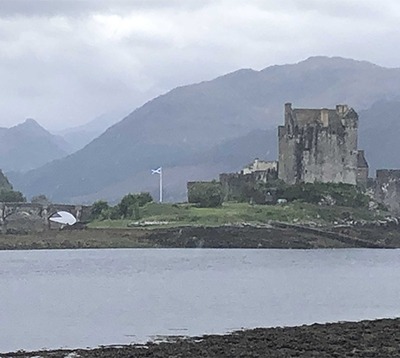 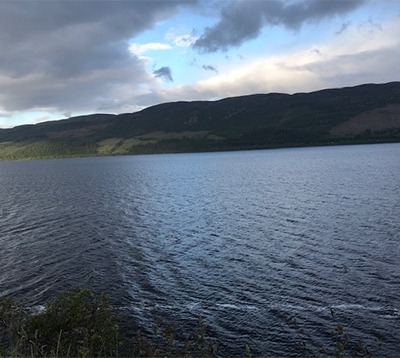 Wait for it…….The world famous LOCH NESS! Yes!!! We came, we saw, we yelled for Nessie, but I guess she was too shy. The tiny, one round a bout, town is filled a Loch Ness exhibition and tourism center, boat tours for Nessie, and tours for Urquhart Castle, All I know is, we went with the intention that Nessie would jump out of the water to greet us! Well, I called her over and over and she never appeared.

Well, anyway, it’s a vast area of a freshwater lake and is very dark due to its depth and peer Moss.. It extends for approximately 23 miles southwest of Inverness. Its surface is 52 feet above sea level. BTW….there is nothing better than seeing a rainbow beginning or ending in the Loch Ness.

Urquhart Castle in Loch Ness was up next. It was closed, but we were able to still get some great pics. The present ruins date from the 13th to the 16th centuries, though built on the site of an early medieval fortification. Founded in the 13th century, Urquhart played a role in the Wars of Scottish Independence in the 14th century. It was subsequently held as a royal castle, and was raided on several occasions by the MacDonald Earls of Ross. The castle was granted to the Clan Grant in 1509, though conflict with the MacDonalds continued. Despite a series of further raids the castle was strengthened, only to be largely abandoned by the middle of the 17th century. Urquhart was partially destroyed in 1692 to prevent its use by Jacobite forces, and subsequently decayed.

That ended our day which was wonderful seeing such sights.