Our visit to Eidenburgh and the Royal Mile! We loved it! 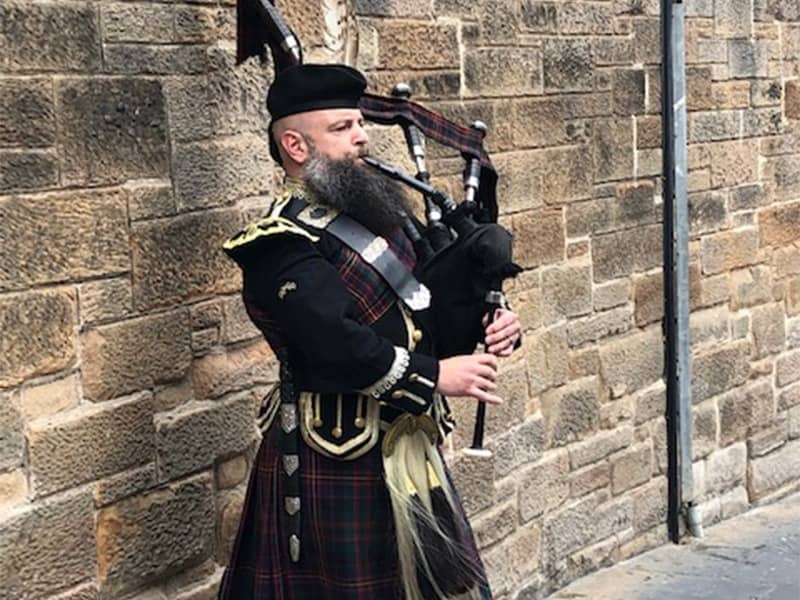 Woke to a beautiful day of sunshine and about 54 degrees. Weather was only calling for 2% of rain, but I still carried the umbrella due to yesterday’s unexpected downpour. We did get a couple rain stops, but that was all. Before we headed to the big city we started our beautiful day headed to what is called, The Kelpies are 30-metre-high horse-head sculptures depicting kelpies (shape-shifting water spirits). The sculptures were designed by sculptor Andy Scott and were completed in October 2013. The Kelpies are a monument to horse powered heritage across Scotland. The Kelpies name reflected the mythological transforming beasts possessing the strength and endurance of 10 horses; a quality that is analogous with the transformational change and endurance of Scotland’s inland waterways. 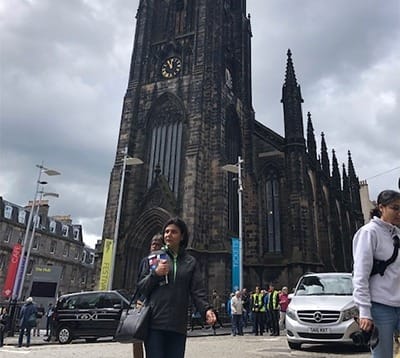 Now, into the big city of Eidenburgh, Scotland!!! We made it with no issues except, where were we going to park? We did not want another episode of yesterday where we had to keep putting money in the pay machine. Yesterday, we had driven into a parking garage, so we decided to head there. We found the garage, got our tickets, and parked. Thank God that was done. I feel like parking is such a huge thing! First things first, COFFEE! We had to get our cappuccinos and found the cutest place called Fatty Owls. Small joint with, of course, owls.

There was a long bench on one side of the cafe that houses all sorts of pillows with owls on them in all kinds of colors. There were just a couple of tables on the opposite side. The cappuccino was delicious. Most places you pay for your coffee or espresso and then pick it up and sit down. This placed served at the table and as we were leaving the lady was asking us where we were from and we had idle chit chat. We started to walk out the door when she asked if we were going to pay. I was so embarrassed. The lady said it was no problem and made me better. After the mishap we ventured in our way and came across a cool record store, yes, I said record, as In vinyl. Very cool place with all kinds of music, from local to alternative. It was called Assai Records. Now, onward and upward. When I say upward, I’m not kidding! We walked around the backside of Edinburgh Castle and it is all uphill! We reached the top which starts what is called, Royal Mile. It’s made of …century cobblestone, is fairly narrow and houses tons of restaurants, shopping, and attractions.

These buildings are all an architect’s dream, I think. There are alleyways leading down and down to another sidewalk that has mostly apartments. The storefronts are quaint in they are decorated with flowers above the doorway and sometimes around the entire entrance way. All this exploring had us hungry for lunch. There were so many places to choose from and they all equally sounded great. We settled upon Deacon’s House Cafe. It sat in the back of an alley and had outside seating. There were baskets of hanging flowers in abundance. They offered outdoor seating which we accepted, since it was such a beautiful day. I had a ham and cheese sandwich with potato and leek soup. Kevin had a tuna, with corn mixed in it, a sandwich with a fresh side salad. Both sandwiches were on fresh baked multi-grain bread. The meal was fantastic! Now, to walk it off!

Heading further down the Royal mike we find what is called the Heart of Midlothian. This symbol…,., So, I spit on it because I need all the luck I can get. I had a couple look at me in disgust. Apparently, no one else around me has heard of this tradition. Oh well, moving on..lol St. Giles Cathedral …WOW! Standing near it makes you feel so small.

It’s massive in size and has black mold covering a lot of the outside giving it it’s old weathered look. The architecture is beyond mesmerizing to say the least. How did they do such intricate work back then. Could you imagine what something like that would cost today? The inside was overwhelming with it’s gorgeous stained glass windows, hanging chandeliers, giant rafters, and decorative pillars. I could go on and on. Back out to the Royal Mile to continue our trinket shopping where we picked up some great momentous to remember our trip and then some. Most stores offer the same items without much price difference unless they are a specialty store such as Harry spotter or the record shop I mentioned. Personally, I wouldn’t spend much time trying to figure out who had the lowest price in cashmere or wool. They are all pretty much the same. I suggest getting those things and spending more time in the shops. We found an antique shop, although expensive, it was amazing! I only wish we could have afforded some of the items offered. Nonetheless, it was great looking at the antiques and touching them. Lots of shopping lead us back to being hungry, so we opted for a fish n chips. We landed in Albadac’s which offered Fish n Chips at a reasonable price. Some of the restaurants could break the average person’s bank account or set the credit card on fire. We did everything cash, no bills when we get back. Anyway, the fish was as big as our heads and in a lite battered that was deep fried. The chips were average, nothing to boast about, and served with peas. Overall, it was really good. Again, bellies full, we decide to end our last day in Scotland. We started our trek back and this time it was downhill all the way!

We found the car and as we paid found it to be 30 pounds. I was like, WHAT, WAIT, 30 pounds? That is ridiculous! That is highway robbery! But, what are you going to do? Pay it, you’re going to pay it. I trust was not expecting that amount! On the way to the hotel we talked about our strategy for packing because now we have our trinkets to contend. We decided we would take everything to the room and start from the beginning. We shoved whatever we could into whatever bag or space we had in a bag to get it to the room, which was on the second floor. Once everything was in the room, it looked like a tornado, but we made it through throwing out unnecessary receipts or booklets. We got it all to fit, but I don’t know how. There were 2 large suitcases, 2 large backpacks, and a personal carry on for each of us. We got hot showers and finally lay our weary heads down to rest for getting home. I checked the flight time and set the alarm, but wait, I thought. Where do we return the rental car, does it need to be on full for gas. Now I’m panicking. I look up the flight and set the alarm. Ok, whew, that’s done, now the car, it says to return it to the same place we retrieved it in the first place. How can we do that when it doesn’t open until 8:00? I guess we will find out in the morning what to do.