Our first day in Ireland Surviving the Trials & Tribulations 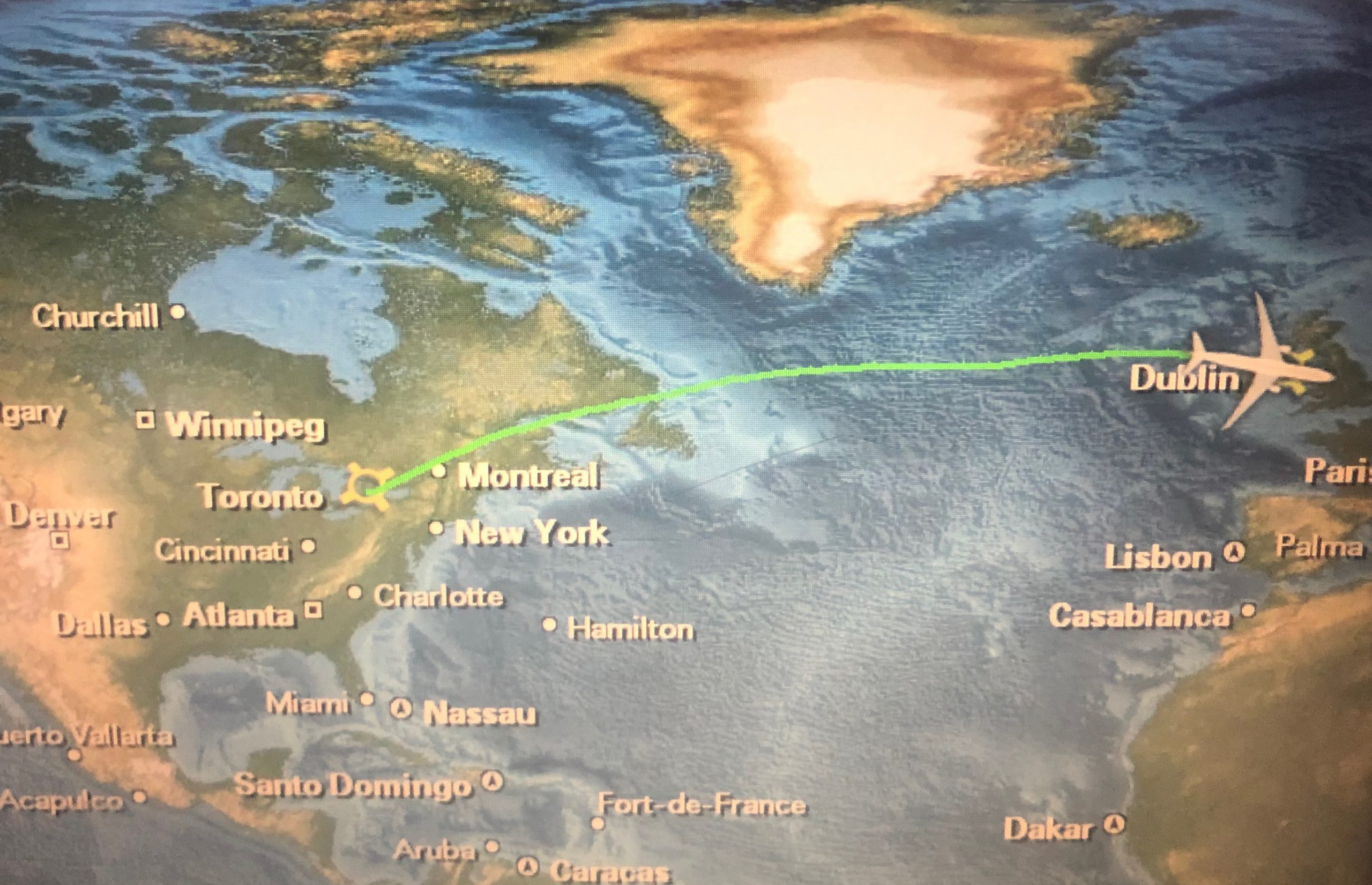 June 7th, our first day in Ireland. The flight from Toronto, Canada to Dublin, Ireland wasn’t bad at first, but as time went on it became torture. The seats are small, you have no leg room, no elbow room, the seats don’t lay back far enough, and the food is awful. However, this is not a negative blog, but merely the reason we are going to win the lottery and be able to fly first class…lol Our flight to Dublin, Ireland would end up being approximately 6 hours and some odd minutes. The flight left at 11:05pm, so we did our best to sleep, but neither one of us got any shut eye. At least any worth mentioning. All in all Kevin did very well and says it is quicker than driving, which we have done a few times…lol. He said it wasn’t as bad as he thought it would be. We did have just a tiny bit of turbulence, which made him doubt the experience of the pilot to keep us from becoming shark food.

As we exited the plane we made our way through vast corridors that were empty and no sign of human life. I started to wonder, where did I take ya this time? Lol We finally made our way to customs where we were asked the usual questions, “Where are you going?” “How long will you be there?” “Why are you visiting?” Blah, blah, blah..,etc. Then it was time to claim our bags and I should Kevin how to check the screen to locate which belt our luggage would be on. We retrieved our bags then caught a taxi to go pick up our rental car. The rental car will be another blog. Tipping a taxi driver in a Ireland is anywhere from just rounding up your fate to $10 Euro if the driver is friendly, gives you advice or recommends places or activities. Ours however, was a bump on a log needless to say. Oh well, we still rounded and it ended up being $10 with rounding.

We got in our little Hyundai i10. It’s a cute car. Now, the issue her is, driving from the right side of the car on on the left side of the road. Th traffic is downtown Dublin is terrible. It seems very confusing like everyone is just doing their own thing whenever they want. Kevin was driving and feeling the stress. We decided we would go to Trinity College to check out the library, but the traffic was more than we could handle for the first few hours.

We ended up heading to the campground that we set up for a 2 night stay. We set up our tent and that was it until we came back. We decided we would give the driving another try and ended up at Bray Seafront. What a cute town or village. Small hometown shops, bakeries, and pubs. The best part was the small area of beach they had. The beach is made up mostly of rock which the waves have smooth and polished them all. The water was very cold, but beautiful watching the waves crash against the sand. We decided we better move on and get back to our campsite before dark in order to set the rest of everything up.

Getting back to the campsite we set the rest of our items that we would need. Both of us were hungry and decided to cook one of several meals several meals that we had picked up at a local Indian store in Columbus. So, I get out our little MRS rocket pocket stove and try my best to contact it to the fuel container with no success. A fellow camping couple approached us stating they had been watching us for a bit and decided to come to our rescue. I had purchased the incorrect fuel container for the stove we had. The couple was nice enough to let us borrow theirs for dinner. It worked great and we will be exchanging the fuel tomorrow (they had closed for the day). We then decide to get showers and I went first. I was back very shortly as the showers only take tokens not coins. Another task for tomorrow. Off to bed to start another adventure and get some sleep. Night travelers!