Nostalgic Immersion at the Midland Theatre The Golden and Silver Age of movies are brought to life in nostalgic immersion through the Summer Movie Series at the Midland Theatre in Newark, Ohio.  The General Admission cost is only $5 and admission is free for Licking County, Ohio residents (age 60+); both GREAT deals!  The season usually starts near the end of July and runs midway through August.
We started enjoying the Summer Movie Series at the Midland Theatre late in the lineup, but we were able to see two films before the end of the 2022 season.  First, we put this one on our calendar, as we wanted to be sure not to miss it: Clash of the Titans (1981).  Growing up adoring Bubo (the owl) and Pegasus, along with being fascinated by Medusa and the artisan craft of Stop Motion Animation, we chose front and center seats in the third row (one of us proudly sporting a recently purchased 1980’s Clash of the Titans t-shirt) to be face to face with our beloved movie characters; of course, we fell in love with this film all over again! 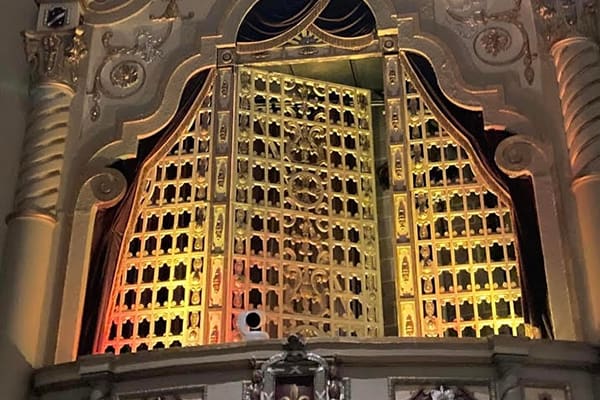 As we were leaving the theatre, the friendly ushers thanked us for coming and informed us they were having a special showing of Grease in a few days due to Olivia Newton-John’s recent passing- a theatre’s way to honor Olivia and her work. One of us has been a huge Grease fan since a very young age and One of us loves all things 1950’s/retro, so we were happy to return to the Midland Theatre for this special occasion. We were part of one happy and clapping (during and after the movie) audience.

Not only do the movies and the people provide a memorable experience, but so do the architecture and artwork of the Midland Theatre itself! If only walls could talk… Built in 1928, the Midland Theatre is most aesthetically pleasing with its marble pillars, exquisite artisan crafted ceilings, and a gorgeous art glass chandelier hanging from the ceiling, as viewers’ heads tilt back looking up in awe at the beauty above. The desire to take photos inside and outside of the Midland Theatre is most instinctive with every visit.
We have plans to return for a musical in November. Expect a future blog post on that eagerly anticipated show. Next year, we’ll be on it and visit the Midland at the start of their Summer Movie Series!