Ireland and Scotland – Our Vacation Summed Up 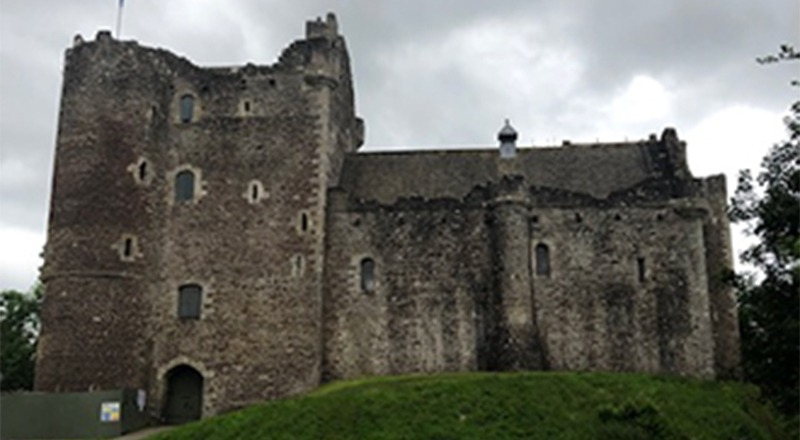 So, Ireland and Scotland. We really do not have words. God’s creations are better than imagined. We both feel so fortunate to have taken this journey and see another part of this beautiful world.

The plane ride getting to Ireland was uneventful thank goodness. Kevin had never flown before, so I was thankful for no issues. Kevin did realize first hand about packing light. I’m not sure that he quite understood. Why would he? He had never flown. We all learn sometimes by trial and error.

We arrived in Ireland about 10:20am, claimed our bags, and picked up our rental car. We decided we did not want to waste a whole day or at least half of the day, so we needed up at Bray SeaFront. A quaint little town in the county of Dublin where we Sea shelled on the small beach. We ate at a place called, Farmhouse Cafe and Bakery in the county of Dublin. Their sandwiches were in home baked bread and as big as your head. Very good! We then picked up some food at the local grocery and headed to the campsite which was, Camac Caravan Park in Dublin. Great clean place! We actually ended up going back later in our trip. Day was full, but great!

We were seeing Metallica tonight!!! We started at a little place to get coffee (I failed to get the name).

Then in to Hill of Tara. We ate lunch at Hill of Tara called Macquires Tara Hill of Heros. Next was a visit to Trim Castle, then the Metallica concert. The day was amazing!! 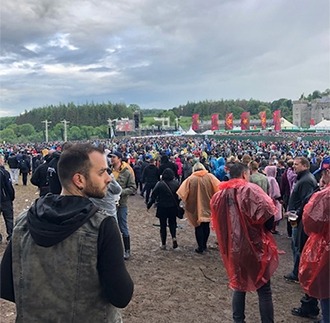 We were seeing Metallica tonight!!! We started at a little place to get coffee (I failed to get the name). Then in to Hill of Tara. We ate lunch at Hill of Tara called Macquires Tara Hill of Heros. Next was a visit to Trim Castle, then the Metallica concert. The day was amazing!!

The medieval town of Kilkenny, was up first, very unique town. Then Waterford Crystal store/factory, and town. We drive along the blue/green water on the highway they call the Wild Atlantic Way. What scenery!!! We made it to Blarney to kiss the Blarney Stone, but it was closed. The castle is not even visible from the town. We drive through the town of Dungarvan to get to Flesk Campgrounds where we would stay for the night.

First stop was Torc Falls. A beautiful waterfall surrounded by lush greenery. Up next was MacGillycuddy’s Reeks which is a mountain range that includes the highest mountain in Ireland. We drive the Ring of Kerry. This follows a beautiful coastline of the Atlantic. Then it was up to the West Coast. Our GPS took us through Ballaghbeama Gap. Very rocky and weird vibe. We landed at Mannix Point Campground.

Spent the day in Dingle, a small fishing village, and had a Fish n Chips. We windowed shopped and had espresso at An Cupan Tae Cafe. Left and drove through Slea Head. Tralee at Woodlands Campground.

Today was the Cliffs of Moher, no words!!! This was an overwhelming site. Next was the tiny village of Tourmakeady. We visited this village because this was Robert Shaw’s home and where he died. He was in one of our favorite movies, Jaws, as Quint. Bunratty Castle in Bunratty was next just by accident and was a great little find. Next was Shrule Castle in Shrule. Again, just came across this gem while driving. Again, while driving we stopped at Christ Church, Church of Ireland which is a ruin built somewhere around late 1700. In need of a break we had an espresso at The Brewery Cup. Didn’t disappoint. Finnegans was a stop for dinner. They are a great authentic Irish place. The food was to die for!!! We set up for the night at Salthill a campground in Salthill. It was right on the water, clean, and relaxing.

Had tea, yes tea, at Cupan Tae (not misspelled) in Galway. Quaint place. Again, just driving, we found a Bridle Path with a Meehambee Dolmen (some believe a Dolmen was a type of religious building related to ceremonial rituals of birth and death). Stop for coffee led us to Saddlers Pub. Driving we found Chapel Farm in Lusk where we found Church of Ireland. Found a tower in Hayestown, but have no name or information on it. Going through Orlynn Park out of nowhere pops up this majestic monastery! It’s called Lusk Round Tower. Ended the day in Robswalls at the beach where we did some shelling.

Drove around and looked at the scenery. Had brunch at Moorland Cafe. Went to Newgrange Tomb, but it was closed. Then back to the campsite, Camac.

Headed to Scotland. Packed our stuff and headed to the airport. Land in Scotland, claimed our bags, and picked up the rental car. Headed to Ratho Park Cafe and had lunch. Found a campground called Mortonhall and pitched a tent.

Our sites today were, Stirling Castle. We were not able to see that day.The Doune Castle, Kilchurn Castle, St. Conan’s Kirk, Castle Stalker, and Ben Nevis (tallest mountain). Next was finding a place to set the tent. Ashaig Campsite Skye, in the Isle of Skye, but this would not be due to the Midge’s. We drove on ending st Old Man of Storrs. We slept in the car and would tackle the mountain in the am.

Climb to the Man of Storrs. Then got coffee at Cafe Arriva. Then headed to the Fairy Pools then to Eilean Donan Castle. Loch Ness to look for Nessie was next, didn’t find her. Found another castle before ending our day, which was Urquhart Castle. This now ended our day.

Town of Pitlochry which was quite cute. Next up was Huntingtower Castle. We ended up at Comrie Croft. Great. Amount place!

Dunblane Cathedral was up first. Next to the cathedral was Leighton Library. We were headed to Edinburgh when we decided to hit the awilliam Wallace Monument. What a gorgeous find!!! Witches Craig is a campground we would pitch for the night. Then we left to get dinner. We found Express Pizza, so good!

Got espresso at a Cafe Nero. Then headed into the city, Edinburgh. Found a great place to eat lunch, Salt Horse. Then it was on yo the Surgeons Hall Museum. Shopped at the local stores, had dinner at The Copper Top,, which was great! Then laid our heads at Premier Lodge.

Spent the day at Royal Mile shopping and eating. Then packed to leave out for home tomorrow.

Flew out with no issues and arrived home safely.