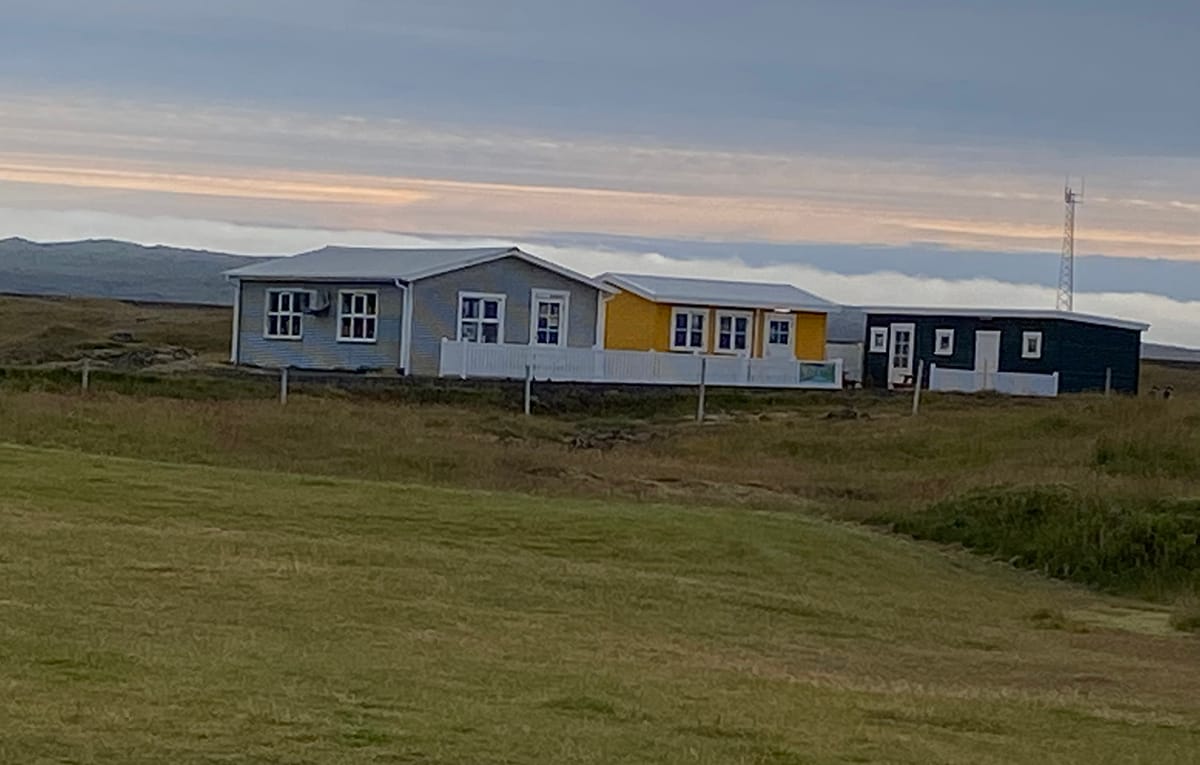 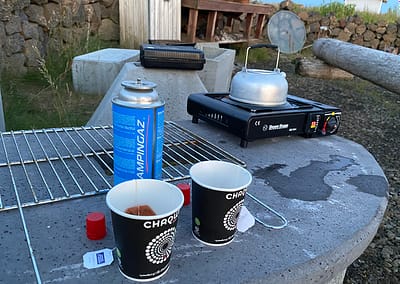 Our first stop of the morning, after heading out from our favorite campsite in Strandarkirkja, was to get gas, wake up with the help of strong coffee, and charge our phones at Orkan gas station followed by taking some photos in the area. We then traveled about 2 hours and 40 minutes to Budardalur and Eiriksstadir, where “Eric the Red” lived. We paid a museum pass to enter the Viking Longhouse, which is a replica of Eric the Red’s house and was constructed directly next door to where his house stood. It was a surreal experience to walk in the steps of Vikings and see the land and water of where they homesteaded. We could see why the area was chosen to live off the land, especially with a creek conveniently flowing down the mountain directly parallel to where Eric’s house stood.

The tour and informational guides dressed in period clothing at the museum were most informative on the Vikings’ way of life, which included getting to hold and wear their armor, and see how they dyed wool in a bucket of natural plants and flowers soaked in water. We got to listen to the guides around a fire while sitting in wooden bunk beds covered in soft fur. As we exited the Longhouse, we stopped to observe a couple other visitors playing a match of Viking Chess outside. The visitor’s center on site had several items for sale and we chose a Viking necklace with a large hammer/cross/wolf charm hanging from a string of black leather rope.

We were getting hungry and opted to eat in a fisherman’s village, Stykkisholmur near the Stykkisholmshöfn Harbour, at a family owned coffee shop called Cafe Nu. Their sweet potato soup, swiss mochas, pecan pie, chocolate cake, and veggie wrap hit the spot after walking around this quaint harbor on a misty cool late afternoon. The quote the owners had written on an old glass artistically framed window inside the cafe stood out to us with great meaning as we were soaking up our time and experiences in this vast foreign country: “We only have one life, but we can choose what kind of story it’s going to be…” by Rick Riordan. Afterward, a pleasant stroll through Stykkisholmur was refreshing and provided a delightful warm village atmosphere.

As we continued to travel, we took the time to pull the campervan over to read markers and take in more sites, which gave us the opportunity to learn about the Eyrbyggja Saga and Kolgrafafjordur (known for their large white herrings). The herrings have drawn seals, orcas, dolphins, harbor porpoises, and other birds to the area. We kept searching the waters to see some killer whales and saw some of their possible “footprints”, but we weren’t exactly sure what lurked underneath the surface. Our next destination was Kirkjufell or “Church Mountain”, a mountain shaped like a church building with little waterfalls nearby. Our next stop on this cloudy evening was the south side of Snaefellsnes Peninsula, Budakirkja; the site of the famous photographic black church and graveyard, which was originally founded in 1703. We were impressed with the history of this parish and how the black church had a circular intricately engraved metal door handle. We didn’t get to go inside the church building, as it was closed, but we took some photos through the windows.

Looking at the map, we hunted for a camping site to settle down for the night and chose the Hellissandur Campsite, near the city of Snaefellsbaer. This was a clean and active campsite, but we chose the most secluded and picturesque space with loads of lava rock directly behind our campervan. After showers and charging our phones, we closed the campervan curtains with our towels hanging from the luggage rack on top of the van, blowing in the wind to dry while we drifted off to sleep.