“Why, this car could be systematic Hydromatic, ultramatic Why, it could be Greased Lightnin!”

Grease was the beginning of John Travolta’s career after he left from the cast of the TV sitcom Welcome Back, Kotter. In Saturday Night Fever (1977), a 19-year-old Italian American from Brooklyn, Travolta plays Tony Manero who works in a paint store and lives with his family. After hours, he becomes the polyester-clad stallion in a New York local nightclub.

Director John Badham films the electric connection between music and dance, and also the desperation that lies beneath Tony Manero’s ambitions to break out of his humble world. The soundtrack, which spawned a great successful album, it was recorded and distributed by the disco classics of the Bee Gees, including “Staying Alive” and “Night Fever.” The Oscar-nominated John Travolta, in his first starring role, is incandescent and unbelievably confident, and his dancing is terrific. In 1978, John Travolta went on to the film Grease, an adaptation of the Broadway musical. With vibrant colors, unforgettably campy and catchy tunes (like “Greased Lightning,” “Summer Nights,” and “You’re the One That I Want”), and fabulously choreographed musical numbers, the ’50s-nostalgia story about the romantic dilemmas experienced by a group of graduating high school seniors remains fresh, fun, and incredibly imaginative. 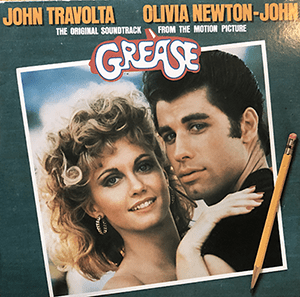 Travolta struts, swaggers, sings, and dances appropriately, while Olivia Newton-John’s portrayal of virgin innocence is the only decent acting she’s ever done. John Travolta traded in disco duds for a cowboy hat in Urban Cowboy (1980), a corny love story about a working man who breaks up with his girlfriend (Debra Winger), then plays out their relationship’s turmoil inside a huge honky-tonk called Gilley’s. The story essentially parallels Saturday Night Fever in its blend of ordinary life, incomplete relationships, and personal pride channeled into niche stardom at a neighborhood club, and the film is really a time capsule on a lot of levels–notably Travolta’s career and late-’70s Western kitsch.

This album overall is a great listen. Grease is the WORD!