Carnival of Souls is a 1962 cult classic film and much of its dialogue is included on this gatefold vinyl including 25 tracks (15 tracks on the first side and 10 tracks on the other).  The listener feels as if the characters speaking on the vinyl are literally in the room due to the authenticity of voices and the quality of the recordings.  Being fans of the film ourselves, the distinctly eerie atmosphere effectively created by the director, Herk Harvey, and other film crew members along with the cinematographic visuals, which have moments of true perfection come flooding back to the mind’s eye while listening to this most enjoyable album.  Film stills are included in this informative gatefold, which we still look forward to reading and learning more about this film and soundtrack.

We made a special night of listening to this vinyl after preparing and eating a carnivalesque meal, which included Mexican portobello personal pizzas, parmesan and garlic hot pretzels sprinkled with red pepper flakes, and cotton candy ice cream for dessert.  Of course, we topped off the Carnival of Souls themed evening by watching the actual Carnival of Souls film.  A big thank you to my husband for coming up with the idea to have this themed experience and for giving me this most special soundtrack on vinyl for Christmas, 2022.  Experiences like this are priceless! 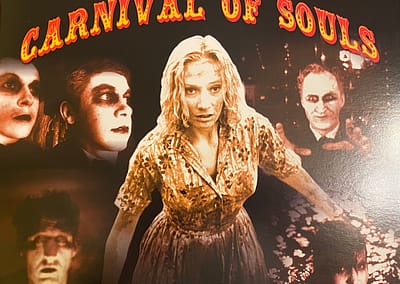