Buddy: The Buddy Holly Story at the Midland Theatre Spitting snow and periodic gusts of billowing wind brought on the night, as we walked from our parking spot to the Midland Theatre located in the Newark Downtown Historic District of Newark, Ohio.  After enjoying the picturesque view of the Midland’s neon light marquee and the Licking County courthouse, we stepped into the will call line for our tickets.  We then proceeded to our seats in the balcony; we thought these seats had the best view of the stage and the theatre’s architecture.

Tonight, we were part of an audience, which included mostly people of more mature generations.  We all were eager for “the internationally acclaimed production” of Buddy: The Buddy Holly Story.  Over twenty of Buddy Holly’s greatest hits were incorporated into the show. 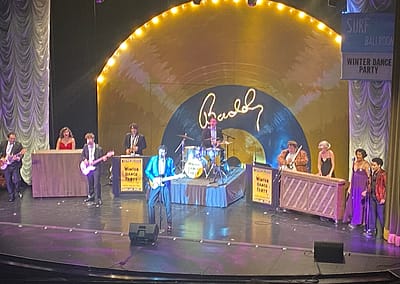 I’ve been a fan of Buddy Holly since I was a little girl, but after seeing this show, I appreciate him even more.  We learned that Buddy Holly was groundbreaking in the music industry and a very brave individual, who was not afraid to be different.  Buddy’s producer wanted Buddy to stop wearing eye glasses, but Buddy refused and asserted that he was going to be himself and do things his (“the Buddy Holly”) way.  Buddy Holly and the Crickets were also the first all white performing band to entertain at the Apollo Theatre in Harlem, New York, New York.

Another interesting biographical fact we learned was that Buddy Holly proposed to his future wife, Maria Elena Holly (Santiago) just five hours after meeting.  Tragically, Buddy Holly died less than six months after their marriage in an airplane crash along with Ritcvhie Valens and The Big Bopper; Buddy Holly’s death left Maria as a widow, who was expecting their first child.  This had to have been such a heartbreaking experience to endure.

Ritchie Valens and The Big Bopper were portrayed well in the show, but the actor who played Buddy Holly was outstanding.  He looked and sounded like Buddy for the most part; his vocal range just wasn’t as high.  We found  Buddy: The Buddy Holly Story to be an engaging show and eye opening.

Earthscaper uses cookies to improve your experience while you navigate through the website. Out of these cookies, the cookies that are categorized as necessary are stored on your browser as they are essential for the working of basic functionalities of the website. We also use third-party cookies that help us analyze and understand how you use this website. These cookies will be stored in your browser only with your consent. You also have the option to opt-out of these cookies. But opting out of some of these cookies may have an effect on your browsing experience.
Necessary Always Enabled
Necessary cookies are absolutely essential for the website to function properly. This category only includes cookies that ensures basic functionalities and security features of the website. These cookies do not store any personal information.
Non-necessary
Any cookies that may not be particularly necessary for the website to function and is used specifically to collect user personal data via analytics, ads, other embedded contents are termed as non-necessary cookies. It is mandatory to procure user consent prior to running these cookies on your website.
SAVE & ACCEPT
->